Algae in a Nutshell 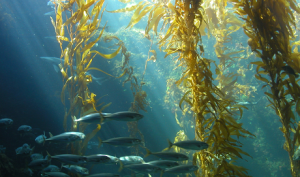 t can range from the microscopic (microalgae), to large seaweeds (macroalgae), such as giant kelp more than one hundred feet in length. Microalgae include both cyanobacteria, (similar to bacteria, and formerly called “blue-green algae”) as well as green, brown and red algae. (There are more varieties of microalgae, but these are the main ones.)

Algae can be grown using water resources such as brackish-, sea-, and wastewater unsuitable for cultivating agricultural crops. When using wastewater, such as municipal, animal and even some industrial runoff, they can help in its treatment and purification, while benefiting from using the nutrients present. Most microalgae grow through photosynthesis – by converting sunlight, CO2 and a few nutrients, including nitrogen and phosphorous, into material known as biomass.

This is called “autotrophic” growth. Other algae can grow in the dark using sugar or starch (called “heterotrophic” growth), or even combine both growth modes (called “mixotrophic” growth). Algae are very diverse and found almost everywhere on the planet. They play an important role in many ecosystems, including providing the foundation for the aquatic food chains supporting all fisheries in the oceans and inland, as well as producing about 70 percent of all the air we breathe.

nhouse gas (GHG) emissions caused by a worrying increase in the world’s population, fossil fuel consumption, industry sector development, and other factors. In order to satisfy the global demand for GHG emissions reduction, clean energy, green fuels and products produced from renewable sources play a crucial role. Apart from renewable heat and power production, there is only a renewable carbon-based source able to replace fossil fuels in the transportation, plastics and chemicals markets: Biomass.

Unfortunately, the biomass value chain is complex due to the wide range of steps required, such as plantation, harvesting, transporting, refining, processing, and so on.

The environmental sustainability of the biomass value chain includes all of these sectors. But even if there is generally a reduction in CO2 emissions, the environmental impact calculation passes through a wide range of value chain aspects, each of them presenting limited operating condition. Indirect Land Use Change, which is mainly due to biofuels production using

food crops such as sunflowers, maize, wheat, sugarcane,  and the intensive monocultures affecting biodiversity, drove the European Union towards a radical change which takes care ofthe land use impact.

And here comes the crucial role of microalgae.

Microalgae are cultivated in photobioreactors, as well as in open ponds, which can be easily placed in desertsoils, or indeed, in any place wherethere is sun and space. The bio-oil rate production per hectare is higher than every other energy crop, and their photosynthetic efficiency (6%) is among the highest ofother biomasses (max 3-4%).

Production costs using other technologies, however, are still high and this barrierhas limited the microalgae market development in past years.

But, new trends are now pushing the microalgae sector towards industrial development on a global level.